Skip to content
*This is a work of fiction* 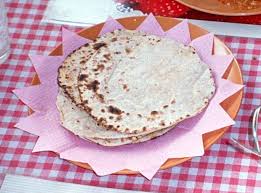 Roti – image Wiki
It was the time of the year, when along with Pati, our
svelte Bahu was visiting Pati’s ancestral home.  She was recently awarded Star performer by her
Manager for her sharp skills and timely deliverance of the project. But at her
in-laws home, her performance was often rated by the size, shape, texture, elasticity
and timely deliverance of Roti and Sabji.
Now our Bahu has been raised in a family which survives by
eating Rice three times a day. The only occasion when her Mom prepares Roti is
when her health freak Dad decides to go on a diet. So naturally, Bahu’s proficiency
in making round rotis was way below average. But in Pati’s household, Roti was
consumed at an abysmal rate.
This was a fact known to all the relatives of Pati, who
never failed to ask one question that she abhors the most, not to mention the
conversation that follows, which always went something like this.
“Beta Roti bana leti ho (Can you make roti?)”, Saas’s elder
sister would ask, eyeing her Saari.
“Ji nahi (Nope)”, Bahu would reply, shaking her head. A
collective gasp would escape from Maami, Daadi, Naani, Bua, Mausi and their
daughters and grand-daughters.

“To hamare Monnu ko kiya khilati ho?? (What do you feed our Monnu)”,
Mausi would ask, with her eyes wide open.
“Cha-wal (Rice).”
Gasp!!Sigh!!Nooo!! an emotional  outbreak would spread among the relatives …
Meek hearted Daadi would almost faint to hear that this raucous female from
some devious Rice-eating land is feeding her adorable grandson Rice.
“Lekin Hamara Monnu to chawal nahi khata na (But Our Monnu
doesn’t eat Rice)”, after gaining her composure, Mausi would ask.
“Ji wo abb sab khate hai. Aur agar Roti khani ho to khud
bana lete hai.” (Now he eats everything, and if he feels like eating Roti, he
makes one himself)
Bahu would reply with a sly smile.
“What!!”. Maami and Mausi would have a breakdown. Daadi – beating
her chest. Granddaughters would dilligently take notes.

Now this scenario is
not just limited to relatives. Often, random friends of her Pati would test her
cooking skills on the parameters of Roti. So when they relocated to a far off
land, outside India, Bahu finally thought that she has escaped the melodrama of
making Roti, until her new neighbour asked,”Bhabi Roti bana leti ho ”
“Ji nahi”
“No problem, my wife
can teach you.” Why ohh Whyy!!!
Exasperately, Bahu
once asked Pati,”What is this fixation with Roti, it’s not that they are made
of Gold and Silver. Is it written on my face that I can’t make Roti’s”.
Pati didn’t look up
from his laptop. This was a trick question. He was in dilemma, whether to “nod
his head” or reply with a reasonable answer.
He decided to go with latter and said,
“Then learn how to prepare Roti and put an end to it”.
As soon as Pati
spoke those words, he knew this was a deadly mistake. He looked up to see his
lovely wife was throwing one of her special Goblin look.

That night when he
had to sleep on the couch, he decided that maybe next time he would just nod
his head.
… to be continued.

Read the second part here – Saas Bahu and Sneaking Roti
** Pati did gained
brownie points in this drama of Rotis, stay tuned to know how. ** All images courtesy Google

5 New Things I did Last Week

42 thoughts on “Saas-Bahu and the Roti Vexation”