Skip to content
Any
resemblance to living or dead is “intentionally” coincidental.
Played
by – Bahu as The Wife, Saasuma as Mother in Law, Patidev as The husband
*********
It
was a lazy Saturday afternoon. Sitting on her comfy recliner, Bahu
was acting busy, furiously typing on her laptop, with her back to Saasuma, who
was sitting on the sofa, watching rerun of “Kahani Aise Taise Ghar” ki.
Patidev was at the office for a major production release (or so he said) while
Sasurji was peacefully resting in heavens.
And
then suddenly, out of no-where,
“Uhhuuuu”,
Saasuma sighed.
Bahu,
at once was alert. She had expertise in understanding Saasuma’s every undertone,
be it –uhhuu, ohhoo and ahhaa. This uhhuu was particularly a dangerous one.
Without
replying, sitting absolutely still, she kept staring at the monitor. Bahu very
well knew that this was Saasuma’s indication for her to obediently enquire
about the matter. Ignoring it was lethal but the fear of getting dragged into
an awkward discussion kept her silent.
“Uhhuuuu”,
Saasuma sighed again. This time a lot louder and animatedly shrugged her
shoulders. That was the cue for Bahu to immediately divert her attention to Saasuma.
She
closed her laptop, walked towards Saasuma with confident steps and sat next to
her.
“What
is it Maaji?”, the “practiced” devotion with which Bahu asked the question
would have put every Balika Vadhu to shame.

“hmmh
I am bored, what else”, said Sasuma in an exasperated tone, “If only I had a
grandkid to play with.” She said with a weary look, gazing towards the far end
of the room.
“Here
it comes”, thought Bahu, but experience has taught her that keeping quite
during such tumultuous ranting was advisable and safe.
“Do
you have any idea how I am continuously laughed upon for not having even one
grandchild. Meena’s DIL bore her 3rd child last week”, she
said, pointing three wrinkled fingers at Bahu’s face.
Meena’s
DIL was two years younger than Bahu. Her fertility rate was marvelled by all
the MILs of the colony and was a reason of distress for every other DIL.
“Look
at you, with your narrow hips, do you think you can even carry the baby”. Saasuma
was on a snubbing roll today.
“But
Maaji it took me three months to shape them...”, Bahu said defensively, feeling
her super toned abs. Yup she was quite pleased.
“tch
tch tch”
“Maaji
… I have been meaning to tell you this for a long time”, Bahu said, as calmly
as her raging mind would allow her to. Today she has to pull out the
Brahmastra. 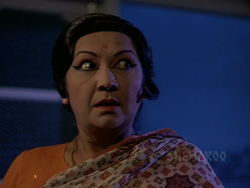 “He
can’t … afford to have kids”, she finished her sentence, “The home loan and the
car loan has tied us down.. and to have to have kids….”, Bahu stopped mid
sentence because she was fully aware that all the words after loan would have
bounced over Saasuma’s head.
No
one could ever reason with the stubborn MIL?
What
ensued was an uninterrupted rant of how young couples do not respect their
elder’s wishes, how Bahu’s reproductive organs would wither like an Old Oak
once she crosses 30, how Saasuma would be a permanent figure of ridicule by Mrs
Verma and Mrs Sharma.
**************
The
balcony was lit by streetlights, both the Pati and Bahu were enjoying a calm
cool night on the swing. It was past 10 pm when there was a knock on
their bedroom door.
Pati
winked at Bahu and said, ”Your turn… go serve your Saasuma.”
Bahu
opened the door to find Saasuma holding a glass of milk.
“Make
sure he drinks it”, is all she said.
No
not milk!!! Bahu thought, Pati hates drinking milk at night. Bahu knew she will
have to drink it again, so that Saasuma doesn’t find the milk untouched.

At
half past 11, Bahu and Pati were still awake, watching Love Actually. Pati was
fiddling with her hair, while she rested her head on his chest. She loved
watching movies holding him close.
A
knock on the door, broke their reverie.
“Your
turn”, Bahu told Pati, with a mischievous glint in her eyes. With a resigned
look, Pati got up from the bed and opened the door.
“Why
haven’t you slept yet… tch tch tch”, Bahu heard Saasuma scolding Pati. She
had to stifle a laugh when Pati came back, looking flushed.

Bahu
loved watching happy endings, the movie was about to end when Pati looked at
Bahu and said
“You
are looking ridiculously beautiful today”. Just as leaned towards her, a knock
on the door made both of them jump.
“Why
haven’t you slept yet”, Saasuma enquired as soon as Bahu opened the door.
“We
were watching a movie Maaji”
“tch
tch I will never get to play with my grandchild”, saasuma mumbled.

“Maaji”,
Bahu whispered, walking a little close to Saasuma and said with a smile, “If
you keep knocking on the door every hour, you and I are both not gonna get
anything to play with”.

The
shock on Saasuma’s face by Bahu’s
boldness was proof enough that she won’t be knocking on their door for atleast
two weeks.

15 thoughts on “The Saas-Bahu Explosion”

The only #flatlay I know 😀 Kurmasana or the tur

Day 10 - for the last day of the challenge I bring

Day 8 - I feel like my toddler enjoys my yoga prac

Day 4 - L-sit or bhramcharyasana. I find all poses