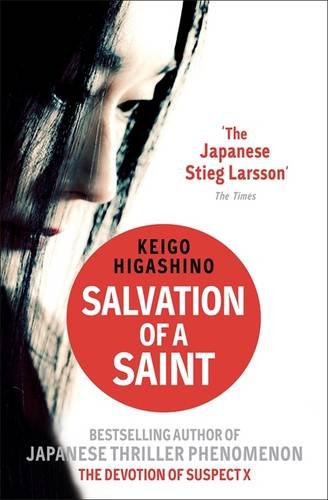 Salvation of a Saint is the second of famous Japanese author Keigo Higashino . The first book Devotion of Suspect X was highly successful and was a hit with critics and readers. That was when physics professor Manabu Yukawa aka Detective Galileo was featured for the first time. “Salvation of a Saint” is second book in Doctor Galileo series.
The plot begins with a sober conversation between Suave CEO Yoshitaka Mashiba and his beautiful wife Ayane. In the next few chapters an extra marital affair is revealed and Yoshitaka is found dead by poisoning. The suspicion falls on his wife Ayane, but she has a watertight alibi. On the day of murder, she was far away from Tokyo, visiting her parents.
The story then revolves around whether Ayane is the murderer or not. Meanwhile Kusanagi and the newly recruited female detective Utsumi are at loggerheads with their understanding of the murder. When Utsumi feels that Detective Kusanagi has fallen in love with Ayane and his judgment is clouded by his feelings, she calls for Physics professor Manabu Yukawa aka Professor Galileo’s help. The challenge to unravel the secret behind “perfect murder” is too tempting for Yukawa to let go. Keeping aside the difference between him and Kusanagi, (which happened in the first book) Yukawa starts investigating the crime.
There are not many characters in the story so each gets time to develop. Although it is evident who the murderer is but till the ending chapters the mystery remains as to how the murder was committed. When eventually the detectives reveal the procedure of how the murder took place, I felt it was somehow illogical. Possible yes but illogical, which kept a few questions unanswered.
The narration of the book is gripping and fast. The various turn of events in finding a clue, the detailed explanation of investigation and Kusanagi’s emotional upheaval keeps the book interesting and entertaining.
Having said that, Keigo Higashino being called Japanese Steig Larsson still remains unjustified.
Anyone who enjoys reading a nice murder mystery and challenging their minds to figure out how the murder is committed will love the book.
**************
About the Author
Born in Osaka, Keigi Higashino started writing novels while still working as an engineer at Nippon Denso Co. (presently DENSO). He won the Edogawa Rampo Award, which is awarded annually to the unpublished finest mystery work, in 1985 for the novel Hōkago (After School) at age 27. Subsequently, he quit his job and started a career as a writer in Tokyo.

In 1999, he won the Mystery Writers of Japan Award for the novel Naoko, which was translated into English by Kerim Yasar and published by Vertical Inc. in 2004. In 2006, he won the 134th Naoki Prize for The Devotion of Suspect X (Yōgisha X no Kenshin). His novels had been nominated five times before winning the award. The novel also won the 6th Honkaku Mystery Grand Prize and was ranked as the number-one novel by Kono Mystery ga Sugoi! 2006 and 2006 Honkaku Mystery Best 10, annual mystery fiction guide books published in Japan.

He writes not only mystery novels but also essays and story books for children. The style of writing differs from his novels, but basically he does not use as many characters as in his novels.

This review is a part of the biggest Book Review Program for Indian Bloggers. Participate now to get free books!